Among the twenty most valuable cryptocurrencies by market cap, over the past 24 hours, LTC, the native coin of the Litecoin blockchain, has performed the best. The coin has increased in value by more than 13%, beating the overall market.

The surge follows MoneyGram’s announcement that users in the United States can now purchase, sell, and hold Litecoin and a few other cryptocurrencies, including Bitcoin and Ether, via its mobile app. MoneyGram is a leading global provider of peer-to-peer electronic payments.

Bitcoin, the cryptocurrency with the most global adoption is also down today by less than 1% and is still trading above the $20k resistance level. Despite dropping by 2% of its value today, Ether has retained its ranking as the second-largest cryptocurrency by market cap and is selling above $1,500.

Levels To Watch Out For

Given how well Litecoin has been performing over the past 24 hours, the 4-hour LTC/USD chart is positive. According to the technical indicators, Litecoin performs better than Bitcoin and the other top cryptocurrencies. Litecoin is currently bullish since the MACD line is above the neutral zone. The 14-day relative strength index of 73 indicates that the overbought area may be approaching Litecoin.

As of the time of publication, Litecoin is worth $62.16. Over the next 24 hours, if the rally persists, LTC might break through the first significant resistance level at $74.68. 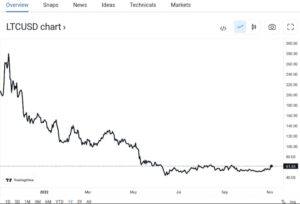 Binance;  a significant cryptocurrency exchange globally. It is more suitable for seasoned investors and provides over 600 different cryptocurrencies for users. Peer-to-peer trading, margin trading, and spot trading are just a few of the many possibilities Binance’s users can use. It is also renowned for having minimal trading fees.

A major cryptocurrency exchange is called Coinbase. The platform is highly suited for novice investors. It provides a variety of coins because there are more than 100 to pick from. Coinbase offers its users options for storing their cryptocurrency, such as the ability to deposit coins on the Coinbase exchange. It has a high degree of security integrated into the platform.